I was pretty taken by Jimmy Carter, Rock ‘n’ Roll President, a CNN production that played a few weeks back but which I just watched yesterday. My memories of Carter as President (I turned 12 in 1976) do exist but are dim. I recall more about his emergence as a surprise Presidential contender than I do anything in particular about his time in office. There’s a vague recollection, immediately following his victory, of a collective “who’da-thunk?” I know, sounds scarily familiar, but at the time this was a good thing, certainly from my perspective. My parents were down-the-line liberals, and Carter had an air of decency about him (a little cartoonish, too, which never hurts when you’re 12) that seemed slightly unusual, even to someone for whom Watergate was mostly just a weirdly compelling if largely incomprehensible TV drama.

Musically speaking, the opening scene of Rock ‘n’ Roll President is the film’s most memorable. Carter, who must be 94 or 95 when this is filmed, sits down beside a record player (a strikingly gorgeous record player, it must be noted), drops the needle down on side 2 song 1 of Bringing it All Back Home, and within a couple seconds of “Mr.Tambourine Man” flashes the same mile-wide grin that no doubt endeared him with voters across America 44 years earlier. “A familiar sound,” he beams, and it’s a testament to how a great record can, at any time, catch you anew: startle you out of your slumber, or maybe just make you experience all over again the particular joy that is unique to music. This brief record-playing scene cues up a good little contemporary montage of Plains, Georgia—cameras finding their way over endless farmland, a street I wouldn’t be at all surprised to learn might actually be called Main Street, in the pews of an empty church, etc.–footage that would barely be worth a mention without “Mr. Tambourine Man.” But really, it’s the 20 seconds or so of the former President sitting beside the turntable and marveling at the majesty of a Dylan song he’s probably heard a thousand times that makes the scene worth revisiting.

The doc, to CNN’s credit, is worthy of its title. It really is focused on Carter and rock and roll, and only loses the plot 15 or 20 minutes towards the end, almost as if the filmmakers got a little panicky and realized they had to also fit in stuff about Carter’s actual accomplishments (and to a lesser extent, failures) as a President, not to mention the humanitarian path he and his beautiful wife Rosalyn followed for decades after, culminating in a Nobel Peace Prize in 2002. If there’s a slight whiff of assigning sainthood status to Carter here, fine by me. There’s a line of thinking about Carter amongst some on the left which suggests that his failures as a President reflect well on his decency as a human being, and though there’s a hint of the sentimental in that idea, it’s hard to dispute based on the evidence of his post-Presidential life. Though for better and worse, I think it’s fair to say. It takes a special type of arrogance to become President, and if Carter had just enough to navigate his way there (the movie does suggest how improbable it was for all this to happen), it’s clear he wasn’t up to—or didn’t have the stomach for—the more unseemly aspects of the job.

Music—and not just rock and roll—imbues the film as surely as it has imbued Carter’s life, and musicians are all over the thing, just as they were all around Carter himself during his rise and his reign. The supporting cast members in the movie paint an incomplete though vivid portrait of the era; it’s like a vision of America as reflected in any issue of Rolling Stone c. 1975-1978 (in Rolling Stone time, that would be pre-punk). Dylan (then entering his Christian phase, and with nothing but laudatory things to say about Carter now), Willie Nelson, and a couple Allman Brothers (Dickie Betts, I think, and Gregg himself) lead the charge, and are interspersed throughout, both as contemporary commentators and in-the-moment comrades. But the role call goes deeper still. Jazz, soul, and gospel artists abound. Dizzy Gillespie shows up twice, once on stage with scatterbox Ella Fitzgerald, on another occasion hilariously goading the President on the south lawn of the White House to join him in a rendition of that impenetrably weird jazz classic, “Salted Peanuts.” Chick Corea, a very ill Charles Mingus, and Cecil Taylor (Cecil Taylor! had he not been dead for several years I might’ve expected a walk-on from Albert Ayler) all show up on stage or off. Mahalia Jackson looks resplendent performing “Down by the Riverside” and Aretha (at the Inauguration, I think) performs a towering acapella rendition of “God Bless America,” previously nothing at all like one of my favourites amongst perfunctory Presidential anthems. (Someone in my Facebook feed last week complained about Garth Brooks performing “Amazing Grace” at Biden’s Inauguration, less because of the rendition than because of how tired the song itself is; I can’t say I haven’t heard it a few hundred too many times myself, but, Aretha excepted, almost anything’s better than “God Bless America.”) The film closes with the Staple Singers performing in an oddly framed shot either in front of or across the street from the White House; had MTV been around in 1978 and was wise enough to acknowledge the contributions of black artists you can imagine it might’ve been placed in heavy rotation, for visuals alone.

Country music, unsurprisingly, figures strongly as well. Along with Willie Nelson, Johnny and June Carter Cash show up (some of the best stills in the movie have Johnny showing a Chinese ambassador some guitar moves), Loretta Lynn belts out “Coal Miner’s Daughter” (not a favourite, but again, quite powerful here), a more-than-resplendent Dolly doesn’t sing but gives Carter an affectionate hug (I swooned), Jimmy Buffett—country enough, right?—shows up, pre-“Margaritaville” and with his unassuming band performs a pretty ballad I really should look at again. I bet I’m forgetting half a dozen others.

Along with the music itself there’s just this constant flow (amplified for the sake of the movie, of course) of people either camped out to watch music on the south lawn, or attending some ball or another with Jimmy at the centre of it. In other words, and no exaggeration, crowds of longhairs and African-Americans, many of them longtime friends, all there at the behest of the President of the United States. I felt at times like I was watching scenes at the White House from another century—not the 20th, maybe the 22nd. Carter professes on at least one occasion to have not been concerned with some of the alarm bells all this cultural activity raised in the halls of Congress (and presumably the Secret Service), though there is one hint that the hobnobbing could be a distraction: Crosby, Stills & Nash just show up unannounced one day at the Oval Office to meet the President. The clear implication from the narrator is that the leader of the free world had a few other things to think about, but he graciously invites them up for a cool photo op anyway.

Oh yeah, John and Yoko are in attendance at the Inauguration too. (As is John Wayne; nothing to do with music, but an amazing scene.) 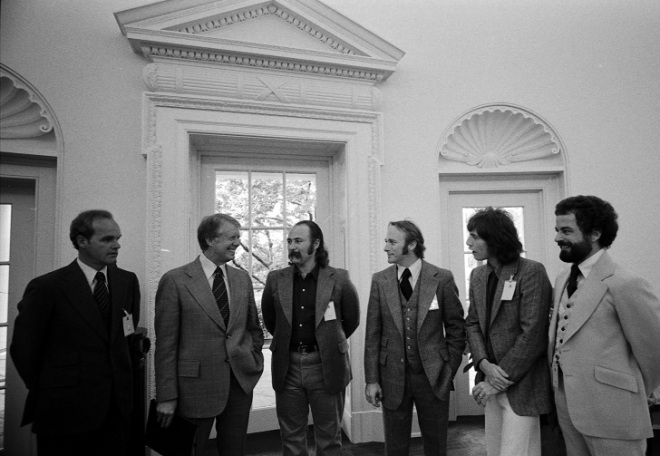 One particularly funny bit: In the run-up to the Primary, Carter is challenged by California Governor, Jerry Brown, which prompts a West vs. South rivalry in real time. Brown, no slouch himself on the culture front, weaponizes Ronstadt and the Eagles against Carter’s Allmans and Willie. (“I liked Jerry Brown,” admits Rosanne Cash, “and loved Ronstadt, but sorry, the Eagles weren’t going to convince me to not vote for Jimmy.”)

Willie Nelson provides the best commentary in the film, and the decades-long friendship between him and #39 is evident. I wasn’t particularly wowed by a later rendition of “Georgia on My Mind” that he performed for Jimmy (hmm, forgetting where and when–Nobel Peace ceremony, I think?), but the movie did send me back to Nelson’s Stardust, which contains “Georgia,” and is the only Nelson album I’ve ever owned and listened to (I’m a fan, mostly of its gorgeous guitar work). Released in 1978, it got me to wondering if there’s in fact a more fitting Carter-era LP? (Am I 40+ years late in suggesting this? I should go back and look at some of the reviews from the period.) I know very little of the album’s back story, but my sense is that it sent a small tremor through the country world—an entire album of stalwart outlaw Willie performing non-country standards, in renditions that flaunted jazz, rock, flamenco, god knows what else. I know, the dumbest thing you can do when reviewing a movie is to criticize something that’s not on the screen, so let’s just say that had I directed Jimmy Carter, Rock ‘n’ Roll President, I would have taken full advantage of the best anecdote in the entire story (and also, perhaps, the saddest). At a very low point in his reign, Carter confesses to spending time alone at night, in a study near the oval office, listening to Nelson records for solace. It’s hard not to come away with the clear sense that he’s adrift at this point in his Presidency—economy heading south, hostage crisis in full bloom—and the mental image of him receding with only records to carry him through is a good one. A spin of “Stardust,” accompanied by still photos of Carter looking alone and despondent—what a cliché, but man, it’s one I would love to have watched.

A Presidency that haunts my reverie

One thought on “A Presidency that haunts my reverie”